The notice requires them to check whether their training aircraft are suitably equipped to handle intentional spinning, particularly an incipient spin.

Why the ATSB Safety Advisory Notice is in place

The notice (Ref: AO‑2017‑096‑SAN-012) is a result of the ATSB’s investigation into the terrain crash that occurred near Archerfield Airport in Queensland in 2017.

On 26 September 2017, an instructor and a student were fatally injured during a routine training flight in a Diamond Aircraft Industries DA40 Aircraft. The purpose of their training was to simulate a Recreational Pilot Licence test to prepare the student for his upcoming exam.

During the advanced stall recovery component of their training, the aircraft entered into a developed spin and descended vertically into the terrain.

In their investigation, the ATSB found among other things that the manufacturer’s manual included a limitation prohibiting intentional incipient spins in the aircraft. The aircraft was not certified for developed spin recovery and its ability to recover from a developed spin had not been established during certification testing.

The report found that in this situation the training authority was expected to acquire or loan a suitable aircraft for these purposes.

What is an aerodynamic spin?

Aerodynamic spin is an aggravated form of a stall.

In basic terms, aircraft stalls when the air above the wings surface becomes turbulent, creating greater drag and reducing lift. Aircraft can stall for many different reasons, but one common scenario is when the plane is flown at high angles of attack. The difference in airflow between the wings can cause the aircraft to suddenly rotate and yaw in one direction, making the aircraft follow a steep, “corkscrew” like downward path.

Spins develop in different stages. An incipient spin is a phase which occurs from the time the aircraft stalls and just starts to roll into a more developed spin. When spin is fully developed, the flight path is nearly vertical with all the forces balanced in equilibrium. However, some aircraft may transition unexpected from an incipient spin to a more dangerous spiral dive. 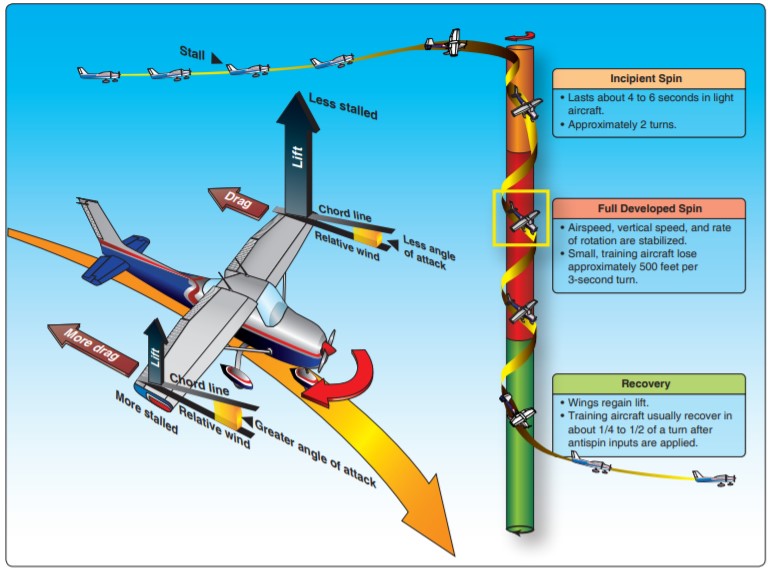 Manufacturer manuals often provide the necessary procedures to recover from aerodynamic spins. However, if there is no such guidance, it is useful to follow established guidelines. See for example, the ‘Spin recovery template’ provided by the United States Federal Aviation Administration.

Training manufacturers should take serious note of the ATSB’s findings and the notice. From the outset, it is important they clarify with aircraft manufacturers the extent to which an intentional spin is permissible on their aircraft.

If your organisation does not have any suitable aircraft for spin training, look to purchase or loan them for those purposes.

Instructors should always be familiar with the limits of their aircraft and always operate them within those limits. As each aircraft is different, they should ensure that they have the necessary training and expertise to recover from spins in the specific aircraft they are teaching with.

If your aircraft does undergo spin (whether intentional or not), always follow the manufacturer guidelines on spin recovery. Otherwise, apply established spin recovery guidelines.