On 21 September 2020 (neatly timed for Zero Emissions Day), Airbus announced the ZEROe, a zero-emission aircraft ambition for the next few decades. Three concept planes under this label were unveiled via livestream, designed not to be powered by fossil fuels but with hydrogen, a zero-emissions energy source.

As the last Airbus A380 rolls out of the production line and the aviation industry struggles in the midst of an unprecedented worldwide pandemic, manufacturers have been working behind the scenes with the hopes of a better future.

These past few decades have not only shown how fragile the aviation industry is but also how significant a role it plays in terms of its effect on climate change. With this in mind, Airbus has decided to show their commitment to  what it hopes to be the next revolution in aviation.

What are the Airbus ZEROe designs?

Airbus Chief Technology Officer (CTO) Grazia Vittadini outlined the company’s zero emissions development strategy in a livestream presentation, pointing out the intention of the manufacturer of having a production-ready zero emission aircraft’s first service by 2035.

The first hydrogen technology demonstration tests will be carried out next year in 2021, with the intention of testing and de-risking cryogenic hydrogen storage and aircraft refuelling practices. 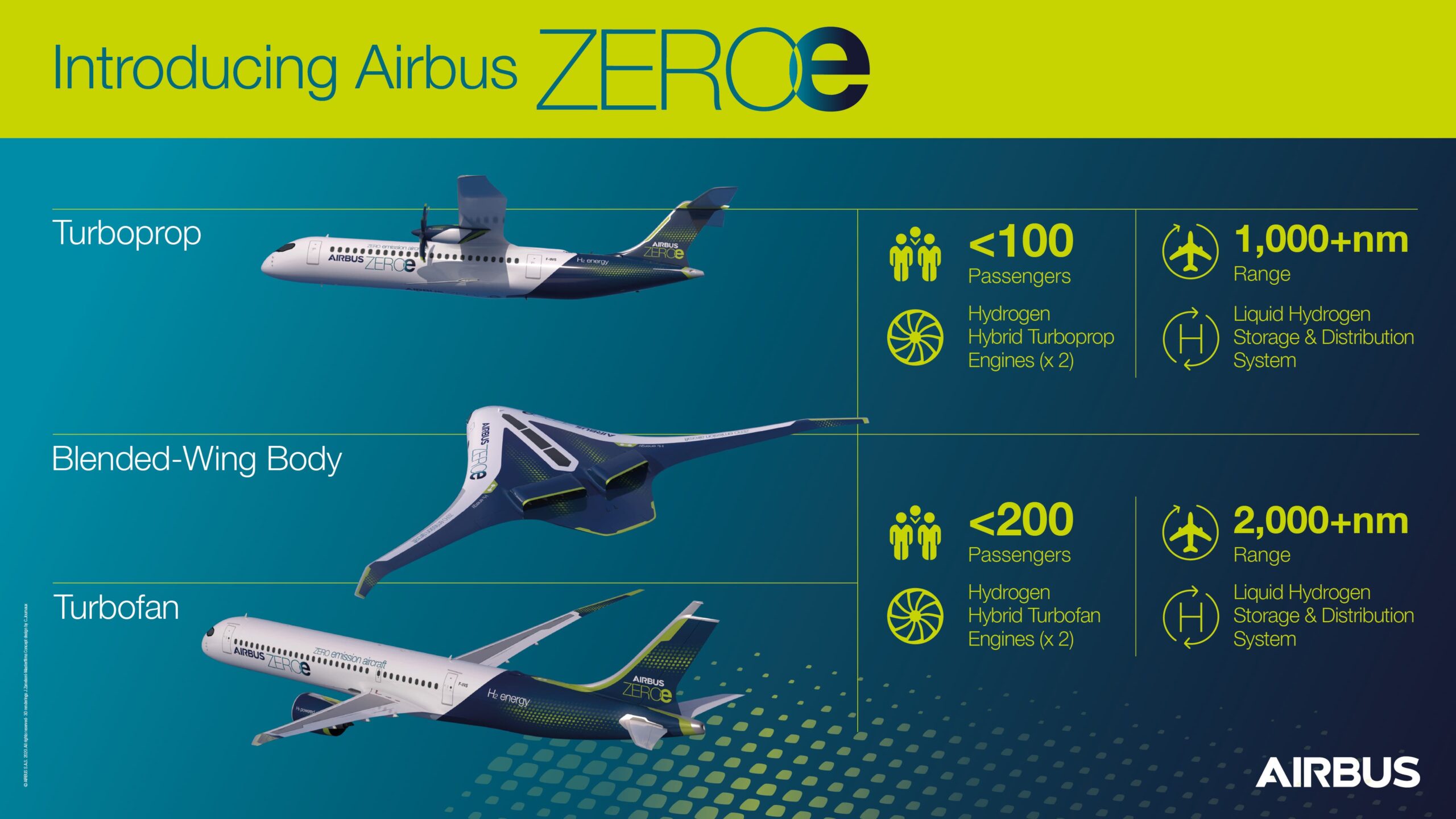 By 2023, Airbus expects to have its first demonstration flight of at least one of the three concept designs. The final hydrogen technology selection will come by 2024.

This is a crucial part of the way the aircraft will be able to power its engines, since hydrogen can be used either through modified gas turbines, as the energy source in fuel cells, or converted to synthetic kerosene. The last option is the least zero-emissions option.

While the first two aircraft designs are very familiar to all, a blended-wing body aircraft is a very rare sight on the airport tarmac. This aircraft design has only entered into production in military applications, such as the Northrop B-2 Stealth Bomber.

A significant advantage of the blended-wing body is the reduced skin drag, which directly converts to energy savings and extended range (with the opportunity of increasing passenger count as well).

This unusual design is simply a concept and we can speculate that it ultimately won’t enter into service. Not only would Airbus have to design a brand new airframe architecture from the ground up, but airport infrastructure would have to change in order to be able to serve this aircraft design. 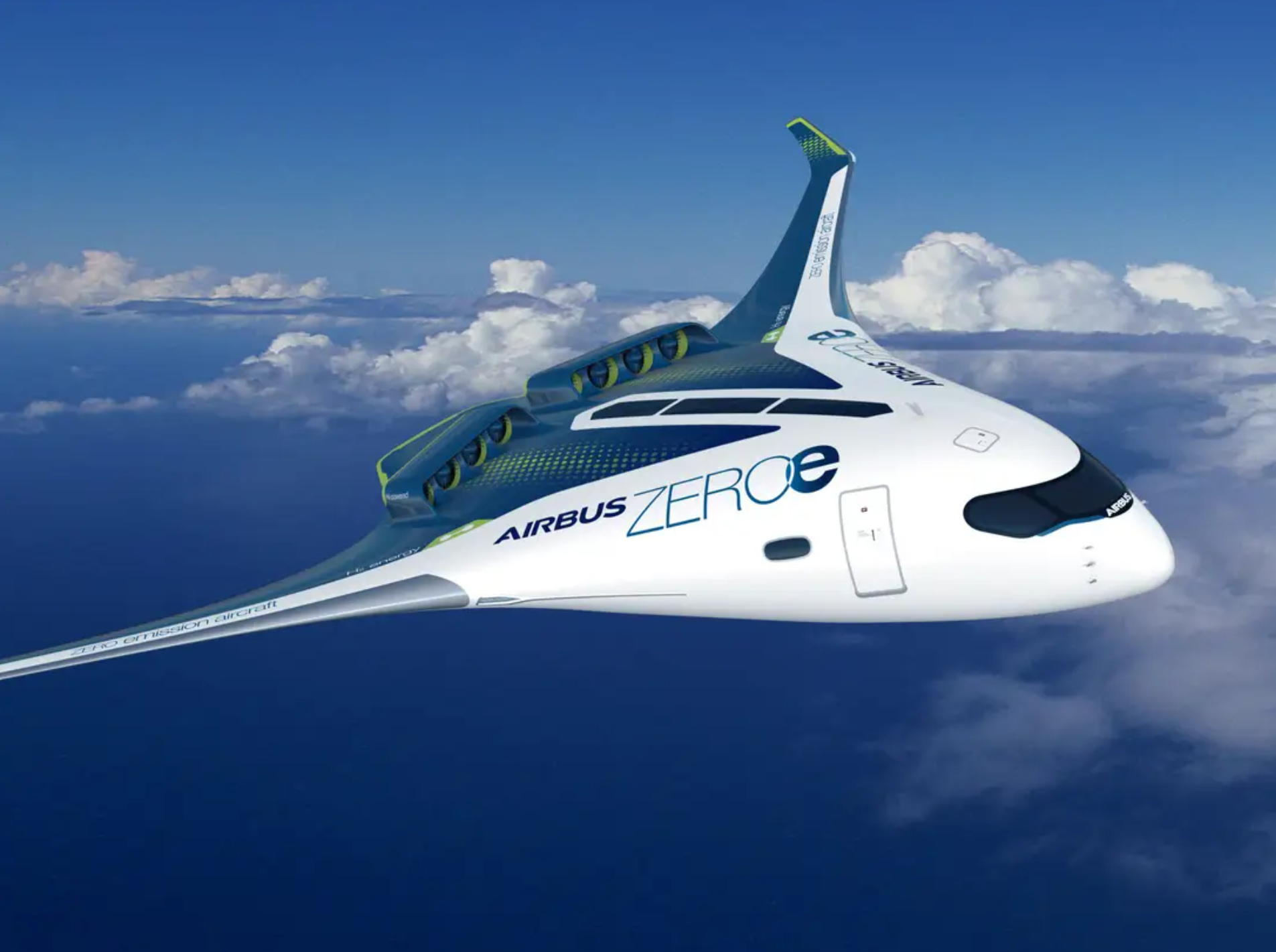 Flight dynamics for this type of aircraft can be expected to be different, particularly with the effect that banking may have on passenger comfort as well as emergency exit procedures, refuelling and cargo handling.

There are many things that Airbus will need to address for this specific aircraft design to be eventually seen taxiing down the runways.

The turboprop and the turbofan designs look much like anything flying nowadays, with the exception that their architecture will have to be significantly changed in order to be able to adapt hydrogen as the fuel. The main issue with hydrogen as a fuel is that it takes four times as much volume as kerosene just to provide the same amount of energy, so storage design will become the first challenge to tackle.

Build it and they will come: renewable hydrogen

Hydrogen is an odourless, colourless gas that can be compressed and liquefied to cryogenic temperatures for easier storage. This cryogenic storage is routinely carried out in the space industry for rockets that operate on liquid hydrogen and oxygen fuel mixtures.

But, unlike current aircraft that store fuel in the wings, hydrogen powered planes will require the cryogenically cooled fuel to be stored within the fuselage, reducing passenger space and the maximum vessel range. Airbus also described the preliminary passenger count numbers and maximum range for these concept aircrafts; with the turboprop seating up to 100 passengers with a maximum range of 1000 nautical miles, and the turbofan seating between 120 to 200 passengers with a maximum range above 2000 nautical miles. 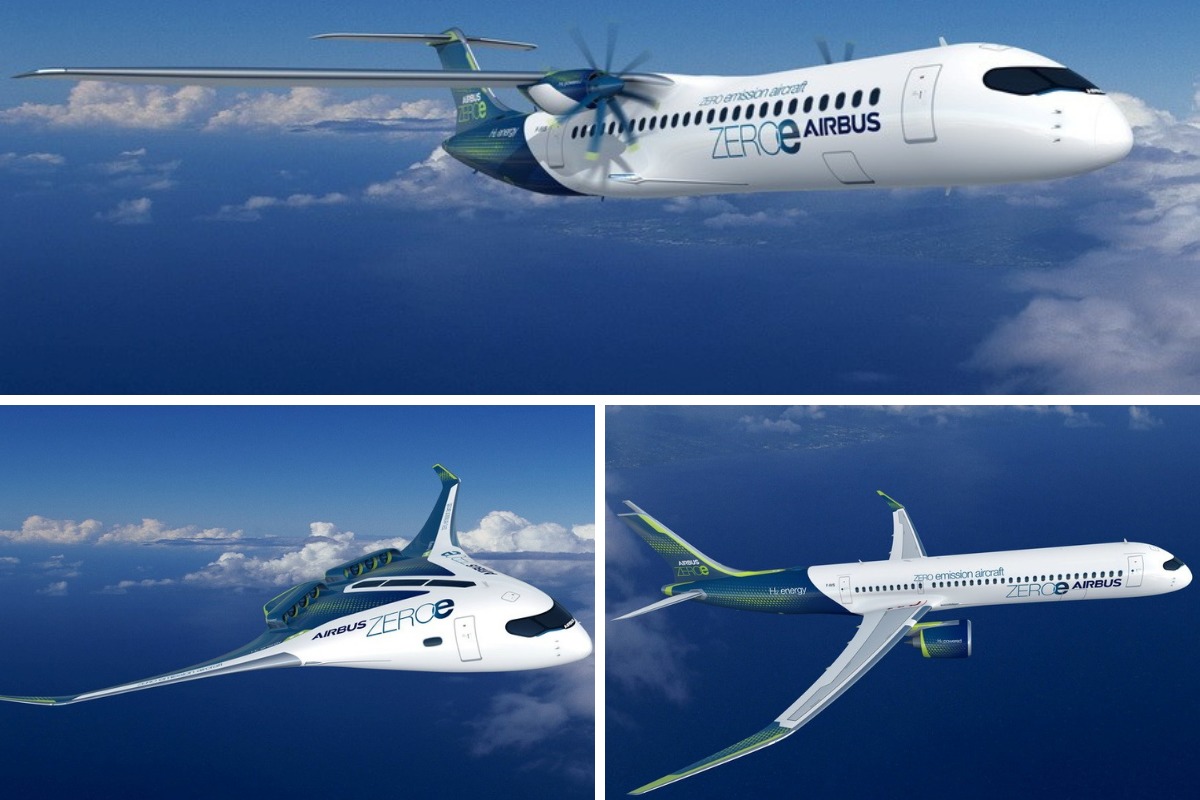 Airbus highlights the importance of using renewable energy in the creation of hydrogen. Hydrogen gas is currently primarily produced from natural gas, a fossil fuel, but it can also be created by means of electrolysis, a chemical process involving breaking down water into its constituents, hydrogen and oxygen, passing an electric current through. The source of this electricity will have to be from renewable energy sources for the hydrogen to be considered renewable.

At this point in time, the vast majority of grid electricity in the world is from non-renewable energy sources. On a good day, the electricity generation mix in eastern Australia may only see renewables peak to about 50%, although this percentage is increasing.

The hydrogen production and network infrastructure in order to meet demand from the aviation industry is practically non-existent. Airbus will as a result need to encourage the development of a generation and storage network as well as the specific manufacturing capability in order to keep the cost of renewable hydrogen to competitive levels – otherwise this is a non-starter despite the zero-emission validation of the whole project.

This will naturally involve billions in investment and will ultimately require players from many involved industries to collaborate and bring costs down. Airbus might ultimately have to convince other aircraft manufacturers such as Boeing to combine efforts into making this hydrogen economy a reality.

Rising from the pandemic, will Airbus succeed?

While the aviation industry struggles to survive in the midst of a global pandemic, it is refreshing to see an aircraft manufacturer look towards the future and take the bold step of reimagining air travel with the Airbus ZEROe – a plane without carbon emissions. The hydrogen economy could be the next big thing in terms of energy supply in the upcoming decades, but in order for this to happen it will require cooperation from many players in unrelated industries.

Ultimately, we can expect mobility both on the ground and in the air to reach low or zero emissions in the coming decades, and this is a great opportunity for manufacturers like Airbus to take the initiative to get one of their concept aircraft on the tarmac in 15 years time. 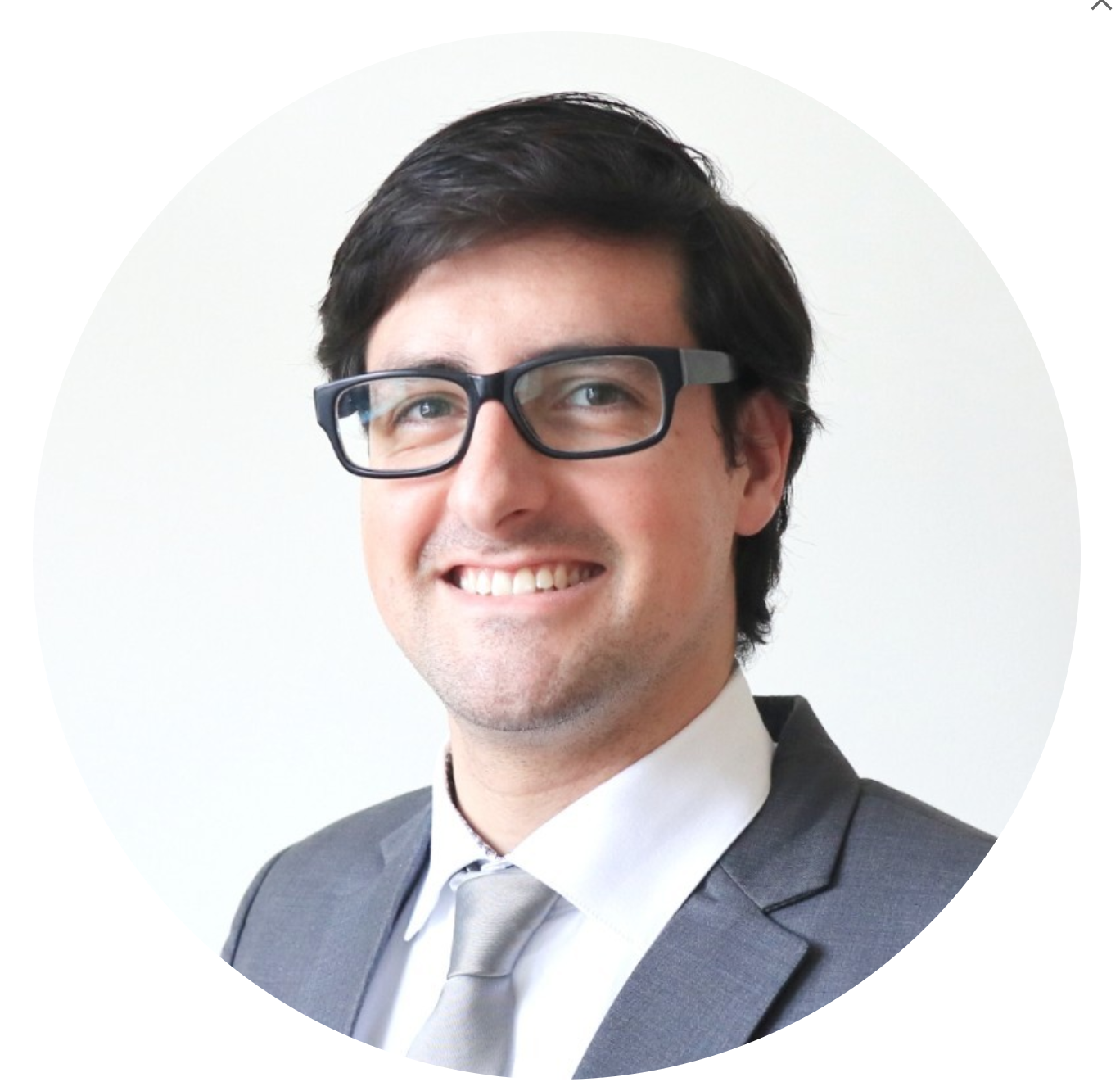 Daniel Moctezuma Baker is a renewable energy engineer and sustainability consultant based in Copenhagen. He was formerly an Engineer and RTO Training Co-ordinator for Global Sustainable Energy Solutions (GSES) in Sydney Australia, before becoming a Consultant in the Sustainable Places, Energy & Waste team at WSP in London, UK.

All three images above are credited to Airbus.